Representing Canada on the World Stage

When you think of elite cyclists, places like Belgium, France and South America come to mind. But what about Prince George?

Kris Yip is a local that has always called Prince George home and he has an impressive cycling resume that includes National Championships, International victories, and Olympic Qualifiers. Although he has never been to the Olympics, Kris is getting a chance to represent Canada at the 2022 UCI Esports World Championships in February.

Growing up in Prince George, Kris was able to make the most of his opportunities and started racing competitively at the age of 15. He was part of a strong squad in Prince George and British Columbia based out of Vancouver.

“I still called Prince George my home,” Kris emphasized the importance of home. “While on the National team, we were based out of Quebec. Through the racing season we would travel from there into the States and elsewhere.”

Kris was also fortunate enough to do a stint in Europe during his career with stops in Spain and France. Through the Senior years, Kris considers himself fortunate enough to have won quite a few International events. Perhaps one of the disappointments was not being able to represent Canada at an Olympic Games.

“We did Olympic trials and World trials,” Kris Yip mentions. “I never made it to the Olympics unfortunately but did quite a few major International events and did well at those.”

Perhaps it is this sting that has Kris Yip looking forward to the opportunity he has earned to represent Canada at the 2022 UCI Esports World Championships. The event is set for February 26th and will involve riding a simulation course around New York with a distance of 55 kms and 945 meters of elevation gain.

To be placed on the world stage, Kris and all the others fortunate enough to represent their countries had to go through a series of qualifying events.

“Back in the Fall it was announced that there would be selection races for the World’s team, I wanted to target that!” stated Kris. “I didn’t know how realistic it would be for me but I did want to see how the selection process would work.”

“The first selection race was the Pan American Selection Race,” recalls Kris. “The top five finishers would get an automatic spot (for the World Championship race). Each nation was awarded positions based on their UCI road rankings. Canada was given five spots for men and five spots for women. Some of the bigger nations with higher UCI points got more spots and those with lower points got less spots.”

The Pan Am Selection Race had one of the largest fields of riders making a top five finish extremely difficult. As it turned out, there was only one Canadian in the Top 5 and the other 4 were from the United States. In the race, Kris finished 11th overall.

With only 1 Canadian assured a spot for the Worlds, Team Canada had to re-evaluate how they were going to identify the rest of their riders. The decision was made to make two more National Selection races to fill the remaining spots. These races would be open to everyone with the top two finishers from each race being looked at.

“I placed second,” Kris mentions matter of factly. “Because of that I was lucky enough to qualify based on that selection race.”

That left one more selection race to fill out the final spots, of which Kris was happy to not have to race in that one. Once all spots were filled there was still more to evaluate to ensure that the racers were genuine. So started a series of interviews and data verification.

Esports is a very serious progression of athletic endeavours with all the same rules and rules that are unique to the virtual nature of esports racing. At the higher level of racing, a rider is required to have dual power sources, wear heart rate monitor as well as go through a height and weight verification process. During race events themselves, the rider must provide a live video of themselves cycling.

For the UCI Esports World Championships, the data verification extends one step further to the actual smart trainer that the rider will be using. All riders will be on identical trainers that were all calibrated beforehand and setup to be identical to all others.

“Virtual racing has gotten to the point where it has attracted a lot of sponsors with online broadcasts of events generating lots of exposure,” points out Kris. “These online platforms (like Zwift and others) have provided way more opportunities for cyclists of all abilities. A competitive cyclist can find a category and event to race in. Zwift allows you to compete with people around the world and it is extending cycling careers.”

Kris is looking to take his two years of high-level racing online with the World Elite Zwift (WEZ) racing team along with his junior and senior experiences to the next level with the extra guidance of Team Canada. Kris is currently meeting on a weekly basis on Zoom to talk with coaches going over strategies as well as riding together with his new team mates on Zwift.

The UCI Esports World Championship takes place on Saturday February 26th on the Zwift course known as New York Knickerbocker. A punchy course that is highlighted with some steep grades on a glass roads in a futuristic version of New York. The race will be two and a half laps and will finish with a third ascent of the Category 4 climb. 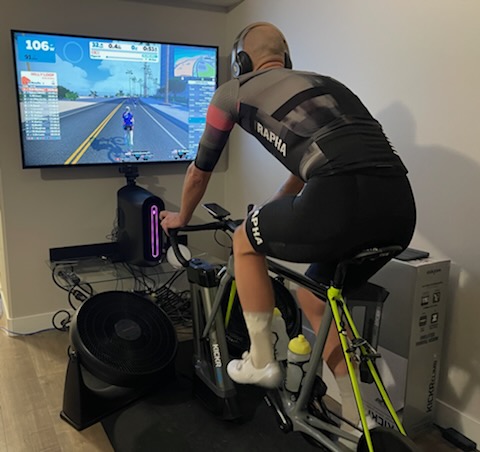